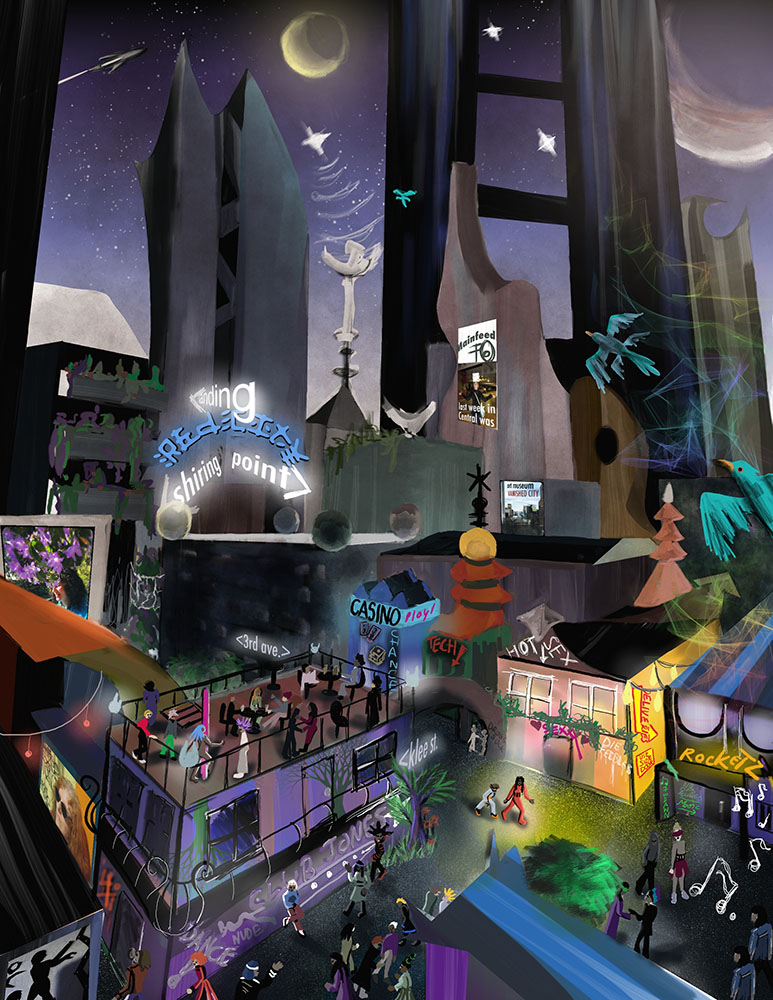 Red City, in my novel Hoshi and the Red City Circuit (among other tales), takes its diversity and streetwise from New York, its green-space-urban-planning from left-coast Portland, and its waterfront docks from “the Other Portland.” Five-hundred-ish years from now (assuming we make it that long), I figure we’ve learned a few things about how to make a giant city livable, especially if environmental and social concerns serve as a check on greed–albeit as the price the corporations feel they must pay for continued dynastic control.

Red City is divided into nine districts. Walking through the districts, in order of founding: 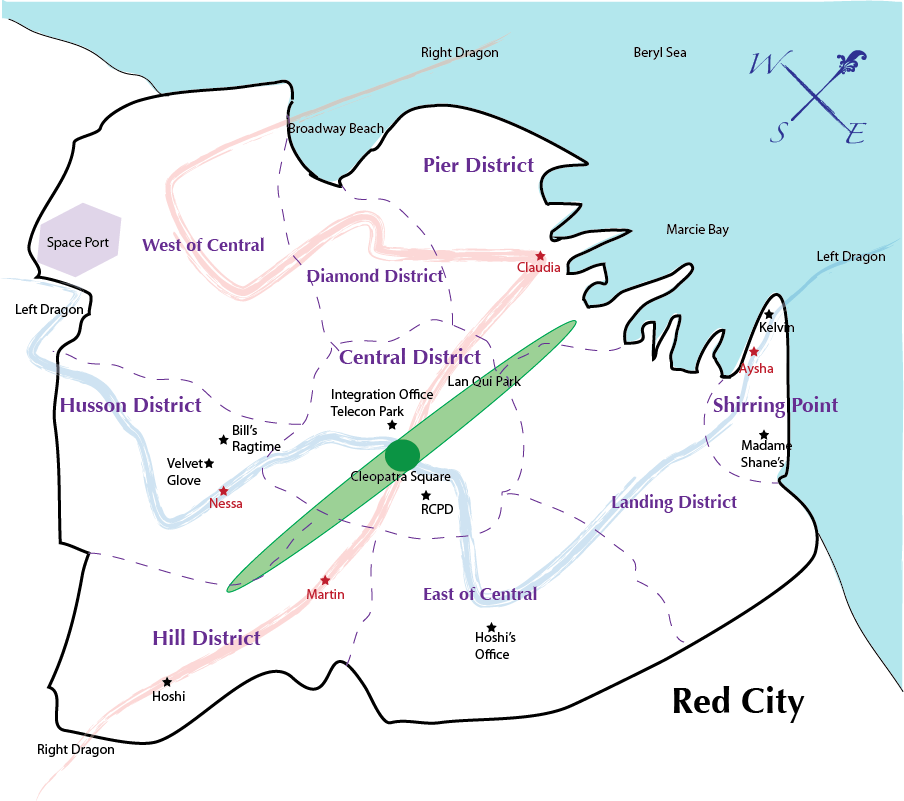 1. Landing is where the colony ship landed, and where the first settlement was built. Originally of historical interest, all the interesting bits were destroyed during later city development. It’s now a mix of businesses and residences, pining a little for its lost past.

2. Shirring Point is where the settlement first expanded. The peninsula developed rapidly around the fishing industry, then collapsed under its own weight as the settlement grew and moved west into Pier. While Shirring retains much of historical interest, and has a storied history, it is “the bad part of town,” abandoned by law enforcement and left to its own. It still hauls in the best fish.

3. Pier District replaced Shirring as the main fishing area, and was well-planned from the start. This is the area of most interest to tourists, and contains a combination of residences, entertainments, points of historical and natural interest, as well as some venerable businesses and institutions such as the Red City Reporter.

4. & 5. Husson and Hill Districts grew up around the same time along with the Cassiopiean red rye agricultural industry (what Red City gets its name from). They are primarily residential/industrial and carry much of the daily business of the city. Husson has a slightly artier and younger edge. Hill has better views.

6. Central developed as a link between the waterfront and the agricultural industry, and the government and key corporations made their home there. Lan Qui Park was cut along with Central to keep the city “breathing.” Red City has a unique–and uniquely strong–local, elected government, with representatives from each of the nine districts responsible for policy, and overseen by a mayor and their chosen legal council.

7. & 8. West of Central (WoC, to locals) and East of Central filled themselves in on their own as the city expanded. The space port, which handles only citizen transport (Big Island IEX handles commercial/industrial import-export), was once part of Husson. After it was rezoned into WoC, and that area took on a more industrial tone, particularly toward the south and west. Both districts serve as transitional zones between the more heavily corporate Landing, Central, and Pier districts, and the more residential Husson and Hill districts.

9. Diamond was the last district to form, and it was rezoned from Pier and WoC through lobbying from the very wealthy corporate executives who resided there. Diamond doesn’t just house the very wealthy, it also houses Red City’s upper-crust arts, entertainment, and shopping areas, and is a significant tourist destination. Broadway Beach–the cove that Diamond was zoned in particular to swallow up, is one of the most beautiful natural places in an urban environment in all the inhabited worlds.