Autistic Rights are Disability Rights are Human Rights. That was the topic of the primer I wrote when this blog started back in January.

While autism makes us different, autistic rights is really about those things we all need, autistic or not, disabled or not, minority or not: food and shelter, respect and love, and empowerment to live our own lives in freedom, happiness, and health.

This is the point I’ve hoped to make with each post, the perspective I’ve wished to share. The change I’ve wanted to initiate.

It is deeply satisfying then that this blog itself will be changing to better reflect the AR = DR = HR equation, as autism-specific blogging merges into broader Disability Rights blogging at change.org in the future. This is As It Should Be.

As far as my own future, I’ll be doing some public blogging still (though with much, much, MUCH less frequency and after a short break) on ASAN’s change.org blog (and who knows where else). I’ll also be starting a new appointment with the Oregon Commission on Autism Spectrum Disorder (remember that?)–my first real experience with public service and something that would have been literally unimaginable to myself not so long ago. I’ll be continuing my advocacy work with ASAN and SAAL. And primarily I’ll be working on community based research with AASPIRE, which, believe it or not, has been my “day job” all along. Somewhere in all this, here’s hoping I’ll facilitate some change in the overall direction of better civil rights and quality of life.

Thanks everyone for your time, your comments, and your insights. Keep pushing–keep making the world a better place for us all.

The Aspergers Association of New England (AANE) has a documentary short posted on their site called My Brother Tom. The film was made by Kaz Gamble about, well, his brother Tom (strange, I know). The film is also about acceptance, understanding, the importance of diagnosis, and insight both into a healthy sibling point of view and into issues specific to that generation of individuals who were not diagnosed until well into adulthood. Most importantly though, it’s a sweet, fun film to watch.

You can view the full film on AANE’s site. 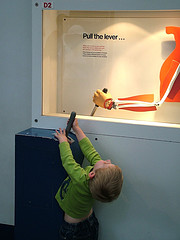 Part of the purpose of this change.org site is to create change. Change in individual perspectives and paradigm. Change toward less assumptions, toward more respect, toward a better understanding. Change on a public, universal level in policy that supports respect, opportunity, equality, and quality of life. Discussion, action, the social-sharing-medium of the Internet.

But I do wonder sometimes–where, really, is the leverage? If we want public attitudes toward autism to shift away from medical-deficit models and toward social-strength models, if we want public perception of autism issues to be as human rights issues, then where is the greatest point of impact? The media? The government? Each other?

How much leverage is there in blog posts? In the discussion that comes from blog posts?

How much leverage in emailing a legislator, or a public figure?

How much leverage is there in one single person perceiving old things in new ways, and telling all their friends? And starting a blog of their own?

How many impact points exist beyond our interactions here, ways to get involved, ways to speak out, ways to demonstrate? In passing out autistic-positive flyers at events that would disparage us, in being visible, in demanding to be regarded? In attending town hall meetings, in getting involved in local policy making, in not letting policy makers get away with ignoring us, autistic people, in policy decisions about us, that directly affect us? In getting involved in research that is good for us rather than bad for us, in working with cross-disability self-advocacy groups and building on the ground work that came before us, in thinking critically about what comes through the media? In simply standing up to an abuser and refusing to take it, in any way, even just once?

How many leverage points are there?

Social systems are huge and slow, they have a lot of inertia, and take a long time to change. But if we find the right leverage points and push, what can we accomplish? How much have we accomplished already? 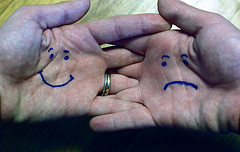 A full written transcript of Obama’s ADA B-Day and CRPD-signing speech is now available for those of us (this includes me) who start to hear “blah blah blah” after about the first 5 minutes (or less).

While some coverage of the event was upbeat, New Mobility’s blog headlines Obama’s ADA Speech Bombs. That post points out a number of the disability stereotypes I’ve railed on repeatedly here in the president’s speech, and relates the audience’s (duh) lack of enthusiasm over an attempt frame medical treatment in a disability rights context. Wrong crowd to try that with.

The review ends with a sarcastic reference to the current situation with the CCA (apparently I was not the only one who felt the idiom lip service was appropriate).

Too, let’s give lip service to the rights of Americans to live freely in the community. Maybe then they’ll stop handcuffing themselves to my house.

In the comments to the post, some agreed with the negative assessment, but others did not.

What do you make of the president’s ADA-Day speech? Good? Bad? Like ADA-Day itself perhaps a mixed bag? 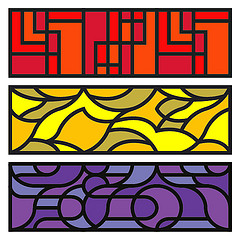 Occasionally some particularly powerful tool for paradigm change erupts–something that shatters assumptions, removes filters, realigns biases, and massively swaps perspectives. White Privilege: Unpacking the Invisible Knapsack by Peggy McIntosh, a checklist of items one can be assured of if they are white in the U.S. like “I can if I wish arrange to be in the company of people of my race most of the time,” is one of those tools.

McIntosh’s checklist has spawned other similar lists such as The Male Privilege Checklist, the Straight Privilege Checklist, and now, thanks to brilliant work on the part of Bev at Asperger Square 8 and many clever commenters, Neurotypical Privilege: A working document. Bev’s original list starts out,

and continues on for the first fraction of the page. The rest of a very long page is contributed items, continued in comments (many of them by some of you), and every one of those comments absolutely worth reading.

This importance of this checklist is not just as a wake-up call to anyone still sleeping in autism stereotypes. It is an illustration that autism issues are in essence minority issues, are civil rights, are human rights issues. If you read nothing else written by someone on the spectrum this year, read this list. (Thank you Bev and commenters!) This post is tragically late. I’ve been trying to write it for, well, all day. Longer, I started trying to write it last night. It is one hundred and five degrees outside and climbing ever closer to that within. My laptop radiates heat like a convection oven. The cat is sprawled as flat as possible on the floor. The floor is starting to feel warm. My thoughts are sluggish, my browser looks like an abstract painting, and hours go… somewhere. It’s like the heat has made me forget how to be conscious.

A few items from my ideas file:

I usually wait until something comes through the feeds that relates to an idea. Then I have an “excuse” to write about it, a tie, an association, a trigger, a connection. This is RIGHT NOW RIGHT HERE RIGHT REAL. Not just my idea, our idea, the world’s idea.

But right now, no. No idea. Just heat. 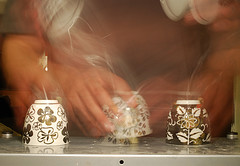 A recent study published in Science theorizes that in AS the capability for understanding mental states exists, just not spontaneously. This conclusion is drawn because study subjects only “passed” a Sally Anne False-Belief Test when verbally prompted, and not spontaneously with their eye gaze.

In fact, there is an interesting paper Does the Autistic Brain Lack Core Modules? that deconstructs the “mind blindness” idea further, including discussing language-based versions of the false-belief test. That paper not only discusses deep issues with the concept of mind blindness, but also some issues with assumptions about eye gaze.

“Mind blindness,” regardless of what the press may say, is not a done deal. The question remains open. There are other equally (more so?) plausible reasons for both differences in social communication and for autistic responses to false belief tests. An article from the Star Tribune (MN) iPods may help Asperger’s kids navigate life mostly highlights the use of iPods for social prompts (interesting correlation perhaps with the Scientific American story on verbal prompts for AS which deserves a post all its own). It may be fair to expand the scope of usefulness to Personal Digital Assistants (PDAs), prompts, and the autistic spectrum in general.

A PDA with calendar, tasks, and reminder capabilities can be great for those of us with little sense of time. Many organizational programs have graphical capabilities for people who don’t resonate well with numbers or words. Notes, tasks, and reminders also can also substitute for short term memory. The awesomeness of PDAs with a built in GPS is invaluable for those of us with a tendency to confuse easily, especially in new places. PDAs that take pictures can help with memory, navigation, orienting in new places, all sorts of things. And PDA applications with favorite sights, sounds, and games can soothe the nerves. Best of all for anyone with executive function issues is that there is only one does-it-all device to keep track of, not a ton of separate calendars, notebooks, devices, etc. to lose, forget about, and curse.

As a long-time PDA user (as soon as they became marginally affordable over a decade ago), I am quite serious when I tell people my executive function skills are present not in my brain, but in my PDA.

The obvious point here is that a PDA can be an invaluable piece of assistive technology for autism-specific “stuff.” Plus, PDAs are mainstream, even “cool,” so there’s no weird looks for using one.

The less obvious point is that it can be beneficial to think about what sort of tool can give a person a skill they don’t otherwise have, rather than pouring energy into trying to find a way to make that person have the skill unassisted. What actually works is more important than appearances. 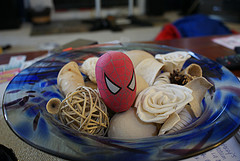 Thumbs Up: The United Nations Convention on the Rights of Persons with Disabilities was signed on Friday as planned. Here’s print coverage from USA Today and (ironically non-captioned) video coverage from CSPAN. The CSPAN video is of the actual signing ceremony, and it starts off with a nice little speech by Hilary Clinton.

Thumbs ? : The motivation for the ADA-AA came from issues with the way the Equal Employment Opportunity Commission (EEOC) had decided to implement the ADA. The original intent for the ADA is as a civil rights law, and the ADA-AA was to restore that original intent. Now debates about EEOC implementation seem to be intent on leeching the power from the amendment. Will the fate of the ADA-AA be to restore the ADA as powerful civil rights legislation, or will we end up back at square one?

Thumbs Down: As the CCA remains off the legislative agenda, CCA rallies continue with confronted the Democratic National Convention. Adapt has set up a sweet action campaign page, complete with (also transcribed) video.

Thumbs Up!: On a non-policy note of special interests and the path to college successes, here’s a lovely article about Cole Kingsbury, geologist and going to college in Alaska. (Side note: volcanoes–YAY!!! Definitely, IMO as well, a perk of living in Oregon!)