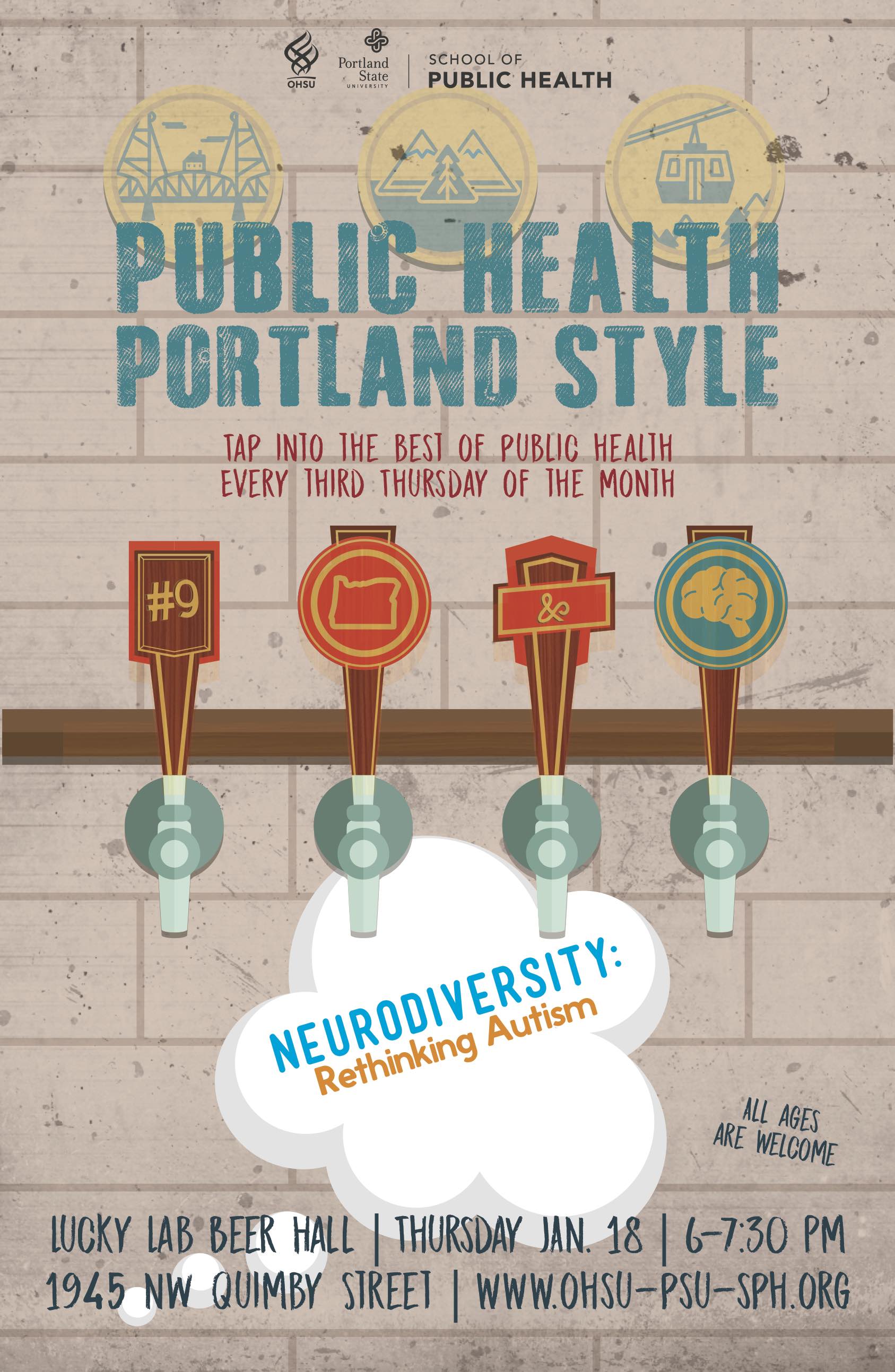 I gave a ten minute TED-style speech at the OHSU/PSU School of Public Heath’s series Public Health PDX Style on Neurodiversity: Rethinking Autism. Due to tech issues in the livestream, part the speech was not recorded. Below is the transcript of the speech in full. The recorded portions of the event can be found here; the second half of the recording is in the comments to that post.

Hi there, I’m here tonight because I’m a research assistant professor at Portland State University in the School of Social Work, where I lead community-engaged social service intervention research to improve outcomes for people with disabilities. I have connections to the school of public health, and to my colleagues Christina and Katie, and when this program asked Katie to do a talk on autism, she thought of me because I’m one of her academic connections with expertise in the area.

But, really, I’m here because of the neurodiversity movement, and our successes at shifting narratives about disability over the past few decades, because when I first heard the term “neurodiversity,” no one would have considered it to have a connection with public health at all, much less have wanted an autistic person to come speak about it. In fact, few people would have considered an autistic person worth listening to at all. I remember a reviewer on a federal grant in 2010 rejecting a proposal Christina and I put in for a healthcare study with autistic adults because, quote, “there is not adequate evidence that the self-reports of individuals on the autism spectrum are valid or reliable.”

But, really, I’m here because I survived the first few decades of my life which were threatened not just because I was weird and disabled, but because I was non-hetero and non-gender conforming in that special time of the eighties when young people were being pushed off bridges to their deaths for the same in the next town over. I’m here because I was fortunate to have a family who valued my strangeness and supported my fumblings, and because I found community with other artists, queers, neurodivergent and disabled people, and fabulous freaks. And we protested and resisted, and drew bodies in chalk on the steps of city hall, and refused to have someone else tell us what we couldn’t do. And we protected each other from bulling and internalized oppression. I’m here tonight because I’ve been fortunate to find spaces where my diversity is valued and my disabilities supported, places like PSU, where I can do research to make better outcomes for the next generation of mes.

More practically though, I’m here to fill in a bit about what neurdiversity is and give a sketch of where we’ve come from as a movement, where we are currently, and what our call to action is in the future. Because how everyone, me, you, as individuals and as a society, think about autism has really important consequences to the life outcomes of autistic people.

So, what the hell is neurodiversity and why should you care about it?

Think for a moment about biodiversity. Biodiversity is good because it ensures ecosystems can bounce back from disasters, that there are multiple pathways to ecosystem survival, increased individual and collective resilience. It leads to biological “innovation” or ecological solutions that work past problems, or disease, and the whole environment can get healthier.

Neurodiversity is that with brains. Neuro instead of bio. Brain-diversity. Which gets ecosystems of societies all those good diversity things. Many different ways of thinking enables resilient communities, innovation and cultural growth, greater ***public health***.

Neurodiversity is also for many of us connected to our identities as disabled people. Neurodivergent. I am autistic and neurodivergent. I’m guessing at least a few people have been cringing at me saying, “I am autistic.” So I want to back up a little with that. Shouldn’t I call myself “person with autism?” Shouldn’t I be separating the disability from my personness—isn’t it “correct” to always put the person first? I’d like to trouble that idea. I’d like to give you the neurodiversity perspective which is that it’s only important to separate the person from the thing if there is something bad or shameful about the thing. No one says, “I’m a person with maleness,” or “I’m a person with Americanness.” So from our perspective, putting identity first is a way of resisting narratives of stigma and shame around autism and disability, around brain diversity. I want to make it very clear, every individual person with a disability will have a preferred way they like to identify themselves, and you should use that individual’s preferred language, always, without lecture, especially if you’re not disabled yourself. But for those of us who take our neurodivergence as identity, as part of what makes us a person, to say, “I am neurodivergent, I am autistic,” chips away at stigma. Chips away at existing social narratives of shame and disease that lead to discrimination, reduced opportunities, that then lead to negative outcomes like unemployment, internalized stigma, greater chance of suicidality, vulnerably to violence, public health concerns, right?

Neurodiversity is also about community. I wasn’t part of the neurodiversity community when it first developed because at that time I’d never heard of autism. Autism wasn’t even in the DSM until a decade after I was born, and the first time I heard it applied to me was when co-workers at the tech company where I was highly valued–yet for some reason never allowed to speak with clients–just assumed I had already been diagnosed. But I was able to find the neurodiversity community pretty quickly after that online, and it resonated with me. It was, again, like my friends who helped me survive my twenties, a group of fabulous freaks keeping each other safe. Community is a protective factor. It is a facilitator of health.

I want to bring up one last shift in how you might think about autism. In disability studies and social science we have various models of disability; two big ones are the “medical” model and the “socio-ecological” model. The medical model is still prevalent in health services, and treats disability as a disease or flaw within an individual that needs to be cured. The socio-ecological model, instead, sees disability as the result of a mis-match between a person’s needs and their environment–a mismatch that comes about because the needs of the majority are already being accommodated. By changing the environment the “disabling” conditions go away–case in point, tonight’s ASL interpreters–if we were somewhere most people were Deaf, we might instead need to provide hearing folks with noise reducing ear muffs to drown out the random sounds in the room that wouldn’t bother anyone else. Creating a more accommodating environment doesn’t make the impairment go away, and not all impairments can be accommodated. But it’s certainly a nice way to provide supports for better life outcomes without compromising all of that good stuff that comes of diversity.

So some of you may be thinking, shit, I’m not neurodivergent, although I really wish I was! And others of you may be thinking, I have a different brain, but I’m not interested in making it part of my identity, that’s just not me. That’s cool. There are still ways the idea can be really useful to you as a doctor, a researcher, a family member, a member of society at large. Because you don’t need to take on an identity or join a civil rights movement to apply the idea of neurodiversity more academically to your daily life. You can use it as a lens in how you see your patients, your friends, that person on the bus who doesn’t make eye contact and rocks. You can use it as a check-and-balance when wondering “should I try to ‘fix’ this behavior, or is it okay to let it be?” You can use it in your public health research to consider how health issues and outcomes for autistic people might be about marginalization rather than medical dysfunction.

So here’s my call to action for you all tonight. If you’re already a part of the movement, keep at the work. Social systems are huge and complex and take a long time to change. But we’re in a much better place tonight than we were ten years ago, fighting to convince someone we even existed at all. If you’re new to neurodiversity, think about it as a paradigm shift. Use it to challenge your assumptions about autism, and to consider both how neurodiversity contributes to healthier communities and how the way we, as a society think about autism effects the lives of those of us who identify as on the spectrum. Thank you all for being a part of this conversation. 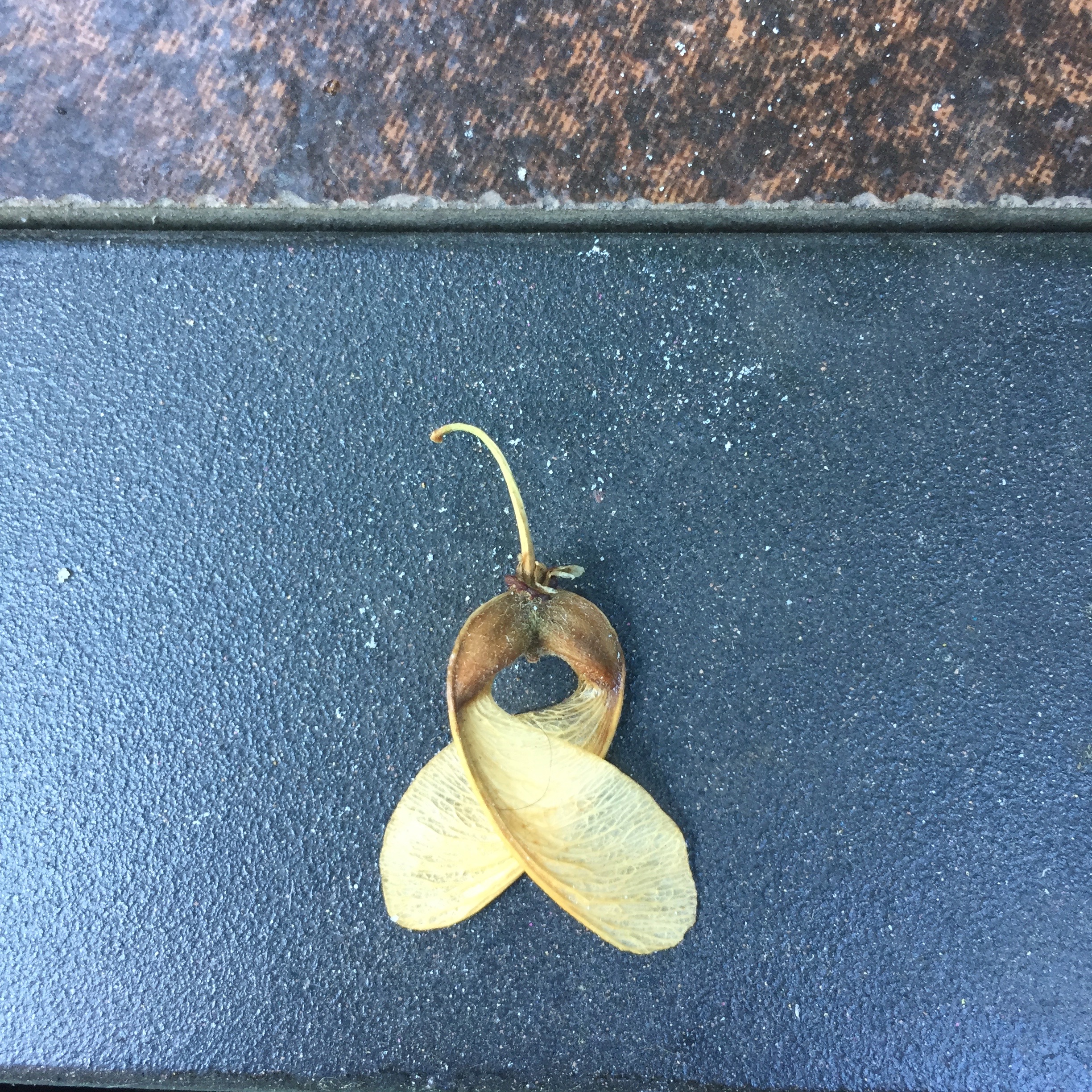